Over the past few years, Antofagasta Minerals has gradually been renegotiating its power purchase agreements (PPAs), switching them from conventional sources - principally coal - to renewables. Indeed, on 2018 Minera Zaldívar was the first Chilean mining company that signed a new power plant supply agreement to operate with 100% renewable energy: a combination of hydro, solar, and wind power.

As a result, as from 2022, 100% of the power used by Antofagasta’s mining operations will be generated from renewable sources.

According to figures from Chile’s Mining Ministry, that puts Antofagasta Minerals ahead of the trend in the industry. The authorities estimate that, by 2023, 45% of the industry’s electricity consumption will be renewable.

The transition has already begun. The first new PPA –for all the electricity required by the Zaldívar mine– came into force in July. It will be followed by Los Pelambres –with the exact date of the full switch depending on the start-up of a new hydroelectric plant– and, at the beginning of 2022, by Antucoya and Centinela. 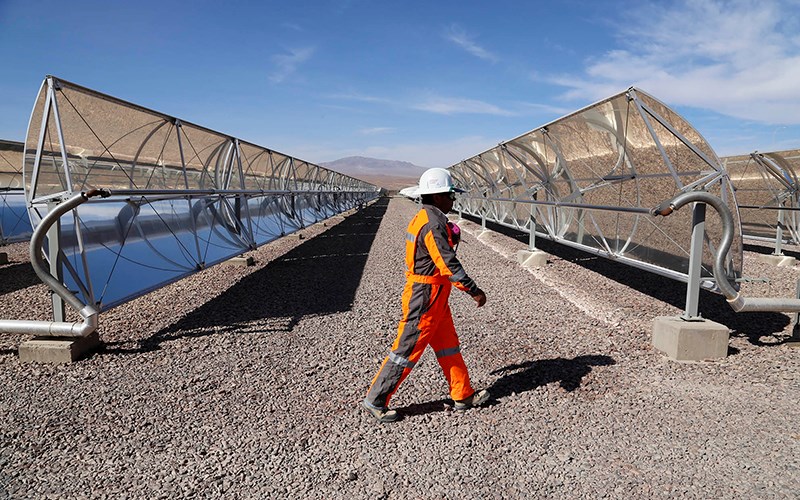 No stranger to renewables

Antofagasta Minerals’ experience of renewable energies dates back to the early years of the present decade. At that time, renewables were still extremely expensive, not only in Chile, but also internationally. However, Chile was in a bind: the flow of cheap natural gas from Argentine had dried up and power supply security had become a major concern.

In that context, Los Pelambres, the largest of the company’s four operations in Chile, led the development of three renewable energy projects: the El Arrayán wind farm and the Javiera and Conejo solar plants. It has since exited these investments, but they continue to supply part of the operation’s power.

“Supply was, of course, the primary motivation for these projects, but we were also looking to open the renewable energy market, to show that the technology was feasible, not something NASA-like,” says Roberto Muñoz, energy manager at Antofagasta Minerals.

At around that time, Los Pelambres also embarked on a self-generation project that was hailed as an important mining innovation: a mineral conveyor belt that produces its own electricity. Still in operation, it takes advantage of a drop-in height over the length of the 12-kilometre belt to generate some 150 GWh/year, equivalent to around 10% of the operation’s total electricity consumption.

Over the past ten years, the price of renewable energies has dropped dramatically, and they are currently cheaper, as well as cleaner, than coal-fired electricity. With electricity accounting for 13% of Antofagasta Minerals’ operating costs, the PPA renegotiations will mean savings that Muñoz describes as “very significant”.

Looking ahead, Antofagasta Minerals –whose electricity consumption, at some 3,600 GWh, is equivalent to around 7% of the total consumption of Chilean households– is aware of its potential to contribute to the country’s goal of carbon neutrality by 2050. “Our next target has to be in line with that goal,” says Muñoz.

With Scope 2 emissions now well in hand, the next great challenge the company has set itself is to reduce direct (or Scope 1) emissions by identifying and adopting alternatives to the use of diesel. “We are convinced that copper mining is key for us all to live in a more sustainable world,” says CEO Iván Arriagada, “and that implies using cleaner technologies for transport as well as generating electricity.”

But renewables energies can also help to reduce Scope 1 emissions. The solar energy that is so plentiful in northern Chile’s Atacama desert, where three of the company’s operations are located, can be used, for example, to replace diesel for heating leaching solutions. This is an area in which Centinela has some early experience.

Electromobility, for which the company is in the process of drawing up its own roadmap, also promises to be important. As well as its implications for future copper demand, it may offer a solution for mining trucks and their thirst for diesel. What is clear, however, is that Scope 1 emissions pose a challenge that is far more diverse than the renegotiation of PPAs.