Red kingklip restocking: A demonstration of compatibility between mining and artisanal fishing

The congrio colorado or the red kingklip, also known as the red cusk-eel or Genypterus chilensis in scientific circles, lives off Chile’s coasts at 10 to 500 metres below the sea. This tasty, nutritious fish is highly sought after and is the main ingredient in caldillo de congrio, or kingklip stew, an iconic dish served in and around the seaside city of Los Vilos, where Los Pelambres operates its Punta Chungo Port. Throughout the year, and especially in the summer, tourists flock to Los Vilos’ restaurants to ask for kingklip dishes, particularly caldillo de congrio.

Kingklip tend to congregate in rocky enclaves but do not migrate and are fairly territorial and sedentary, circulating in very limited areas. Due to their limited mobility and high demand, artisanal fishermen in the area have seen a decreasing number of them being caught and it is estimated that there is more than 3,000 tonnes of unsatisfied annual demand in the national market alone. 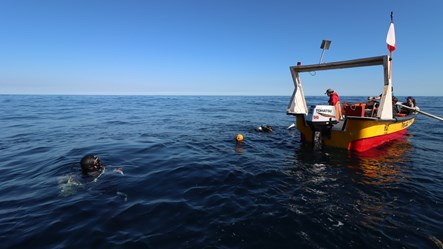 Over the past decade, while Los Pelambres has been complying with its environmental obligations to restock molluscs such as abalone, oysters, sea urchins and scallops, it has built a positive relationship with the fishermen of Los Vilos. It also became concerned about the kingklip fishermen’s situation so four years ago it joined a programme backed by Corfo, the Chilean economic development agency, with the technological support of aquaculture developer Colorado Chile, to restock the fish in Los Vilos’ Conchalí Bay.

The company’s support for the red kingklip restocking plan has strengthened the development of sustainable artisan fisheries, according to Reinaldo Ortiz, Head of Public Affairs for Los Vilos at Los Pelambres. “Our involvement shows we’re interested in the same cutting-edge technology, innovation and development that are of interest to the fishermen,” says Ortiz. “These concrete actions demonstrate our concern for the fishermen’s livelihoods and strengthen their fishing capabilities and control of production.”

The so-called Strategic Technology Programme for Aquaculture Diversification includes two action areas relating to the aquaculture production of kingklip. The first is the raising of smolts, or young fish, for their release into Conchalí Bay to restock of the native species; the second is the raising red kingklip in small-scale land-based grow-out centres, complete with recirculating aquaculture systems (RAS), until the fish are ready for harvesting and commercial sale. 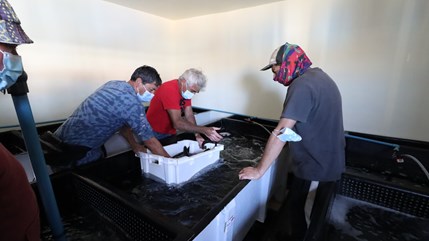 The initial steps involved technical training for the fishermen and installation of facilities and, in the last year, the fishermen have successfully raised kingklip smolts and seen the fruits of their labour.

According to Rodrigo Lotina, Assistant Public Affairs and Communities Manager at Los Pelambres, the programme brings together a number of interested parties: the State, which is looking to improve the country’s competitiveness and catch diversity, the fishing industry, researchers and academics focused on marine farming, and “all of us at Los Pelambres who are interested in artisanal fisheries doing well.” 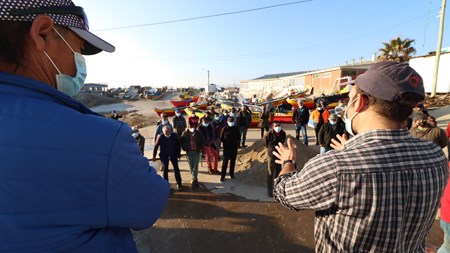 Besides supporting the livelihood of Los Vilos’ fishermen, Alejandra Medina, Public Affairs Manager at Los Pelambres comments that, the programme’s value is in demonstrating the possibility that artisanal fishing can coexist with mining. The mine’s Punta Chungo Port loads up to 70 ships a year to transport copper concentrate and is a key part of the Los Pelambres Expansion project, which includes the construction of a 400 litres per second desalination plant which will be expanded to 800 litres per second once the necessary permitting for the second phase of the expansion project has been obtained.

The kingklip restocking project shows the results that collaborative community work can bring, says Medina. “We have been working in partnership with associations for many years on projects aimed at innovation and the sustainability of artisanal fishing, and we feel we are important to the future and economic development of this sector,” she adds.

Ortiz – who proudly introduces himself as the son and grandson of fishermen – echoes that sentiment, noting that the Los Vilos fishermen have taken great pride in employing cutting-edge technology to raise and restock the red kingklip within the parameters of environmental stewardship, something which had not previously been done in Chile and something that may not have been possible without the help of Los Pelambres. 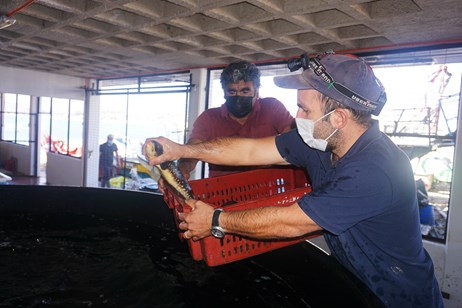 The fishermen are satisfied with how the programme has progressed and express hope for the future. “This is something that we had no idea about, but we’ve received daily training on how to manage the RAS, the feeding, oxygen levels and the filters,” says Oscar Villalobos of the Caleta Las Conchas Trade Association, and he now expects to be able to supply the association’s two restaurants and several stalls that sell fresh seafood to the public.

In turn, Eduardo Pueyes of the Caleta Las Conchas Union is confident that this farmed resource will increase fishermen’s income and adds that the programme is “a very positive alternative” considering the declining congrio population.