Exploring the Potential of Blockchain Technology in Mining

Together with the World Economic Forum and other companies from the mining and metals sector, Antofagasta Minerals is developing a platform to track CO2 emissions in the copper supply chain.

Albeit created for and most commonly associated with financial transactions, blockchain technology has potential applications across many different industries, including mining. And the reasons are clear: a blockchain is essentially a database but with characteristics – efficiency, transparency and security – that mean it can be used not only to streamline business processes and facilitate access to real-time information but also to share information among players who, in other circumstances, might be less inclined to trust each other.

Exploring the options that blockchain offers is precisely what seven leading mining and metals companies, including Antofagasta Minerals, are doing with the support of the World Economic Forum (WEF). Through the Mining and Metals Blockchain Initiative (MMBI), they are working to be able to trace the CO2 emissions associated with copper from its production at the mine through its processing and on to its inclusion in an end product.

“The aim is to be able to say there are so many ounces of copper in, for example, this mobile phone and they correspond to the emission of so much CO2,” says Guilherme Ávila, the digital transformation specialist leading the project for Antofagasta Minerals.

However, the most important aspect of the project, he adds, is the experience it is providing of collaboration between companies with different systems, cultures and needs. As well as other copper producers - Anglo American, Eurasian Resources Group, Glencore and Minsur - the diverse group includes Tata Steel, a manufacturer, and Klöckner & Co., a distributor.

That collaboration, which enriches the learning process, is possible thanks to particular features of blockchain technology that facilitate trust among its users. Once data has been uploaded, it is essentially sealed in “blocks” - which are then joined in a “chain” - that cannot subsequently be altered by any of the users. The data’s storage is also distributed across different servers to which all the users have access. As well as reducing the risk of data loss, this further facilitates trust by sidestepping the need for an all-powerful system administrator. 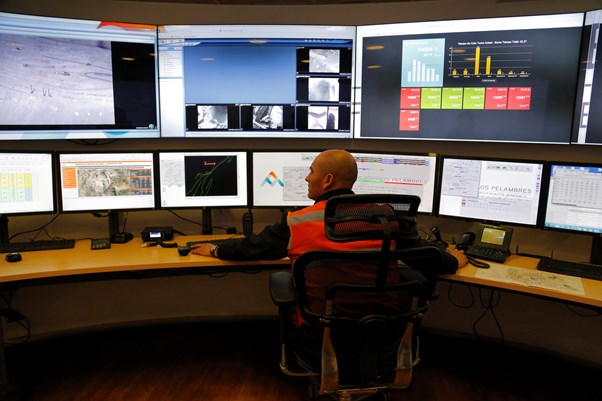 In addition, each user controls the other users’ level of access to the data it has uploaded. A mining company can, for example, upload by-site data, but establish permissions under which other users have access only to this information in the form of aggregated averages.

For Antofagasta Minerals, the project, headed by its Innovation area, forms part of the company’s broader digital transformation. “Working within MMBI allows us to innovate together by creating the beginnings of a new technical foundation to meet consumer trust, reduce risk, and offers new opportunities,” says Iván Arriagada, CEO of Antofagasta Minerals.

The story began in 2019 in the framework of the WEF’s mining and metals group whose members began to talk about how blockchain, albeit still an early-stage technology, could be harnessed to create value in the industry. By October, the consortium of seven companies, all leading members of the WEF group, had been formed and a decision to focus on emissions’ tracing was soon reached.

The key objective was to gain a better understanding of the technology, recalls Alan Muchnik, manager of innovation and energy at Antofagasta Minerals, but the traceability of emissions, as a case study, was an attractive option. “It has environmental, social and reputational implications and is in the interest of all the industry, not just the seven companies,” he says.

Just over a year later, in November 2020, the project had successfully completed tests, using false data, that demonstrated the technical feasibility of tracing emissions through its platform, built in collaboration with Kryha, a Dutch blockchain consultancy company. A key next challenge will be to interest players further downstream in the value chain - for example, manufacturers of parts for mobile phones or cars - in using the platform.

With the technology validated, the consortium’s attention has now also turned to drawing up a business plan. It should be possible to monetise the information the system produces, says Ávila, and there is also the matter of protecting its intellectual property.

For Antofagasta Minerals, however, the project has already delivered benefits. Based on this first experience of blockchain, it has already identified other potential uses of the technology as it advances in its digital transformation, reports Muchnik. In terms of reputation too, it stands the company in good stead, positioning it as an active player on climate change.

"Technology will not be the only solution to address climate change, but it is a key tool to reverse the situation. Blockchain is one of the technologies with the greatest potential to strengthen the global cooperation needed to boost the fight against this phenomenon," says Alejandra Vial, environmental manager at Antofagasta Minerals.

But the real benefits are probably still a way in the future. They will become apparent, suggests Ávila, when copper ceases to be a commodity and its end users, in pursuit of carbon neutrality, begin to classify - and pay for - it according to how clean it is.