We are seeking new design, safety and process solutions for the disposal of mining waste by using creativity and innovation, and working with others.

Chile’s national geology and mining service SERNAGEOMIN is responsible for inspecting waste disposal facilities, together with other technical bodies – such as the water authority (DGA) - in the regions where mining operations are located.

We have four tailings storage facilities in operation: two at Los Pelambres, one at Centinela and one at Zaldívar. They have all been designed with high safety standards, constructed using the downstream method, and are regularly monitored by independent, qualified experts. We also participate in international and public-private alliances to strengthen tailings management at local and global level.

Depending on the copper extraction process, mining generates waste which is deposited in tailings storage facilities, waste rock dumps and spent ore dumps, as well as other industrial waste. Each type of waste is managed in accordance with current regulations and with additional measures to protect the safety and health of people and avoid pollution of the soil, and surface and underground water.

Antucoya, Centinela Cathodes and Zaldívar mainly generate waste in the form of spent ore from their leaching operations while Los Pelambres and Centinela Concentrates generate tailings; in all cases, waste rock dumps are required.

The general manager of each mining operation is responsible for mining waste and reports to the Group’s Board. The corporate environmental department is responsible for controls, monitoring and incident reporting. Since 2015, we have improved communication and warning systems with the community, particularly at the Mauro tailings storage facility.

Innovation has been a priority for Antofagasta Minerals to achieve new and safe forms of storing tailings.

At Centinela, we operate a “thickened” tailings storage facility. This innovation provides significant benefits such as greater physical stability than conventional tailings and enables us to recycle more water to be reused in productive processes.

At Los Pelambres we operate the Mauro and Los Quillayes storage facilities (the latter is used as backup) which were designed to meet the high Chilean safety standards and go beyond these in some aspects of their operation.

In September 2015 the Mauro tailings deposit withstood an 8.3° magnitude earthquake 100 km away, the strongest earthquake in the region in more than 70 years. It suffered no negative impact and continued to operate normally.

Separately, in March 2019 the Church of England pensions Board and the Swedish Council on Ethics for the AP Funds on behalf of a large group of investors sent a letter to nearly 700 listed extractive companies requesting specific disclosure on every tailing facility under their control. The Company’s response to this request can be found here.

Our tailings storage facilities are reviewed twice a year by a group of independent international experts who assess their condition and management, and report directly to the CEO and Board.

As an ICMM member, we support recent proposals to develop an independent, international system of managing tailings deposits. We also actively participate in the ICMM working group on the matter which has two main lines of action:

We also participate in the Consejo Minero’s (Mining Council) tailings working group which is focused on facilitating implementation of the ICMM’s Position Statement in Chile and preparing a guide to develop emergency procedures.

Statement on the stability of our tailings dams and deposits

The waste rock we remove to extract ore and the spent ore we generate through the leaching process are stored in specially prepared areas within our facilities.

In Chile, the location, operation and closure of dumps must be authorised by the environmental authorities and SERNAGEOMIN.

Our processes produce hazardous industrial waste, such as used oil and batteries, and non-hazardous waste, such as sludge and timber. All are managed in accordance with legal requirements.  Whenever possible, we recycle waste to avoid its final disposal.

In addition to Chile’s strict existing regulations on waste, Law 20,920 came into force in 2017 which established a waste management framework, extended the responsibility of the producer and promoted recycling, which included tyres as a priority waste. 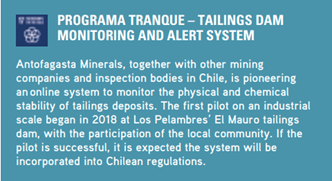