The Group’s approach to considered growth allows it to focus on controlling capital costs and optimising production from existing operations.

The Group’s approach to considered growth allows it to focus on controlling capital costs and optimising production from existing operations. It achieves this through careful project management and constant monitoring of the efficiency of its mines, plants and transport infrastructure. In 2018 Centinela’s Encuentro Oxides brownfield project ramped up to full capacity and Centinela’s molybdenum plant started operating. Additionally, Phase 1 of the Los Pelambres expansion was approved, with construction beginning in early 2019.

Where possible, debottlenecking and incremental plant expansions are used to increase throughput and improve overall efficiencies, as these projects often have lower capital expenditure requirements and generate higher returns than greenfield projects.

The Group continues to review its options for maximising returns and reducing the capital cost of projects and is enhancing the capabilities of the project team to improve project execution strategy, management and control. 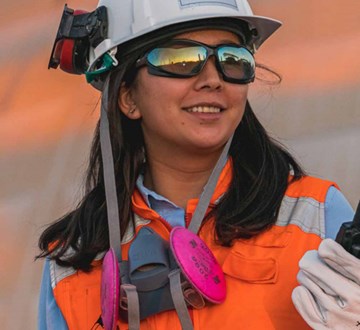 This expansion project is divided into two phases in order to simplify the permitting application process.

This phase is designed to optimise throughput within the limits of the existing operating, environmental and water extraction permits. The Board approved the project in October 2018 and the award of major contracts and long lead items with construction beginning in early 2019.

The capital cost of the project is $1.3 billion, which includes $500 million for a 400-litres per second desalination plant and water pipeline. The desalination plant will supply water for the expansion and a potential further growth phase (Phase 2) and will act as a back-up for the existing operation in extreme dry conditions, were these to occur. Desalinated water will be pumped from the coast to the Mauro tailings storage facility, where it will connect with the existing recycling circuit returning water to the Los Pelambres concentrator plant.

The EIA for the expansion was approved in February 2018.

In the second phase of expansion, throughput will increase to 205,000 tonnes of ore per day and, using the large resource base of Los Pelambres, the mine’s life will be extended by 15 years beyond the current 20. As part of this development the Group will submit a new EIA to increase the capacity of the Mauro tailings storage facility and the mine waste dumps, and extend certain operating permits. Work began on the environmental baseline study for the new EIA in 2017 and will be completed in 2020, along with the early stages of community engagement activities, in preparation for submitting the EIA for approval in 2020.

Capital expenditure for this phase was estimated in the pre-feasibility study completed in 2014 at approximately $500 million, the majority being on mining equipment, and increasing the capacity of the concentrator and the Mauro tailings facilities. The conveyors from the primary crusher in the pit to the concentrator plant will also have to be repowered to support the additional throughput.

Critical studies on tailings and waste storage capacity have been undertaken and are now progressing towards the feasibility study stage. However, the project will only proceed once Phase 1 is significantly advanced and will require the submission of extensive permit applications, including the new EIA. First production from this phase is estimated to be in 2023 at the earliest, depending in large part on the length of the permitting process. Phase 2 is expected to increase copper production by 35,000 tonnes per year.

The construction of a second concentrator and tailings deposit some 7 km from the existing concentrator is being considered in two phases. Phase 1 would have an ore throughput capacity of 90,000 tonnes per day, producing copper, and gold and molybdenum as by-products, with an annual production of approximately 180,000 tonnes of copper equivalent. Once Phase 1 has been completed and is operating successfully, a further expansion is possible and would involve increasing the capacity of the concentrator to 150,000 tonnes of ore per day with annual production increasing to 250,000 tonnes of copper equivalent, maximising the potential of Centinela’s large resource base.

The EIA for both phases of the project was approved in 2016 and the feasibility study for Phase 1 is expected to be completed during 2020. The capital cost estimated in the 2015 pre-feasibility study for Phase 1 was $2.7 billion, which included pre-stripping, mining equipment, a concentrator plant, a new tailings deposit, water pipeline and other infrastructure, plus the owner’s and other costs. The feasibility study will update these estimates as well as including an evaluation of the potential disposal of Centinela’s water infrastructure and the evaluation of a new milling and crushing strategy using high pressure rolls rather than the more traditional SAG mills.

The feasibility study for the Zaldívar Chloride Leach Project was completed in 2018 and the project is expected to be brought to the Board for approval during 2019, following the completion of detailed engineering and subject to a favourable outcome or progress on the EIA for the extension of water rights beyond 2025. The application was submitted during 2018 and is currently being reviewed by the water regulator, a process which includes consultation with the relevant communities.

The project will improve copper recoveries from the secondary sulphides ore by adjusting the leach process through the addition of chlorides to increase the chlorine content of the leach solution. This process is based on a proprietary technology called CuproChlor® that was developed by the Group at its Michilla operation (which closed in 2015) and was based on many years of experience at the mine, which had similar ore types to those that are processed at Zaldívar.

The project requires an upgrade of the Solvent Extraction (SX) plant and the construction of additional washing ponds at an estimated capital cost of $175 million. If approval is granted this year, the project completion date is expected to be in 2021. As the Group equity accounts its interest in Zaldívar, capital expenditure at the operation is not included in Group total capital expenditure amounts.

Twin Metals Minnesota is a wholly-owned copper, nickel and platinum group metals (PGM) underground mining project which holds the Maturi, Maturi Southwest, Birch Lake and Spruce Road copper-nickel- PGM deposits in north-eastern Minnesota, US. In 2018 an update of the pre-feasibility study was completed on an 18,000 tonnes of ore per day project producing an average of 42,000 tonnes of copper per year plus nickel and PGM as by-products, the equivalent of some 65,000 tonnes of copper per annum.

In 2017 the Group commenced preparation of the Mine Plan of Operations (MPO), a prerequisite for permitting applications, and expects to complete it in 2019. Following a thorough review, it will be ready to be submitted to the relevant Federal and State agencies. While the MPO is being reviewed the Company will advance the feasibility study.

After reaffirming Twin Metal’s right to renew its two federal mineral leases, the Department of Interior reinstated the leases to TMM in May 2018 and they are expected to be renewed during 2019. In October 2018, the US Forest Service announced its decision to rescind its proposal to withdraw federal land from the Superior National Forest.